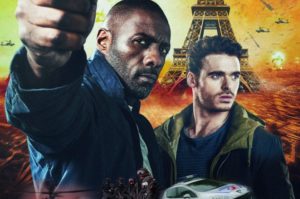 Michael Mason, a pick-pocket living in Paris steals a bag with a teddy bear in it. Not realizing the toy contains a timed bomb, he tosses it aside on a busy street. A few seconds later it explodes, killing four people. CCTV footage reveals Masons face and the French police tag him as a terrorist threat. The explosion, although botched, was set up by a select group of the French Interior Ministry as a decoy so they can make a half billion dollar digital transfer from a bank, (closed on French National Day) -hence the title Bastille Day. In a separate CIA investigation the unruly agent Sean Briar, discovers the real story behind Masons “terrorist attack”. The two men, on different sides of the law, collaborate to bring the corrupt members of the Ministry down.